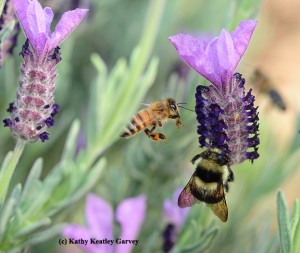 Today some more of my research was published. In it I show that diseased bees deposit parasites on to the flowers they visit. These parasites can then infect healthy bees visiting the same flowers, or be transported by an unsusceptible bee species to other flowers to reach their host species.

I allowed bumblebees from hives infected with three different bumblebee diseases to forage on a patch of flowers in a flight cage for a period of 3 hours before removing them from the cage. Then I released disease-free honey bees into the cage and allowed them to forage for a further 3 hours on the same flowers, as well as a patch of uncontaminated flowers which were brought in at the same time. Immediately afterwards, the shared flower patch, the honeybee only flower patch and the honey bees were all screened for the bumblebee parasites with alarming results. All three of the parasites were detected on the shared flowers, while two out of three were detected on the flowers which only the honeybees had access to, as well as inside the honeybee colonies.

The experiment was repeated using honeybees from hives infected with two honeybee diseases and disease-free bumblebees and yielded similarly worrying results. Both parasites were found on the shared flowers, as well as on the flowers which only bumblebees had access to, and one of the two parasites was detected inside the bumblebee colony.

The study also compared how two different flower types aid the dispersal of bee parasites, and found that bell shaped Fairy’ thimble flowers contained higher parasite loads than more open Pansy flowers. This is likely because the bees spend more time in contact with bell-shaped flowers than they do with more easily accessible open flowers.

These results suggest that flowers play an important role in the transmission of diseases between bees.

“The upshot of this is that a range of parasites in diseased bee populations, such as infectious imported bees, may spread to wild bee populations that forage on the same flowers. On a wider level, flowers as parasite hotspots suggests that areas where there is a lot of pollinator traffic per flower, for example areas with low flower density, may have high parasite dispersal between pollinators compared to areas with low pollinator traffic per flower, such as flower rich areas.”