The Publishing group Elsevier today notified me that my that work published back in 2013 is one of the most highly cited (top 5) within their journal of invertebrate Pathology over the period of publication to June 2016.

-According to Google scholar, the article has been cited 55 times. 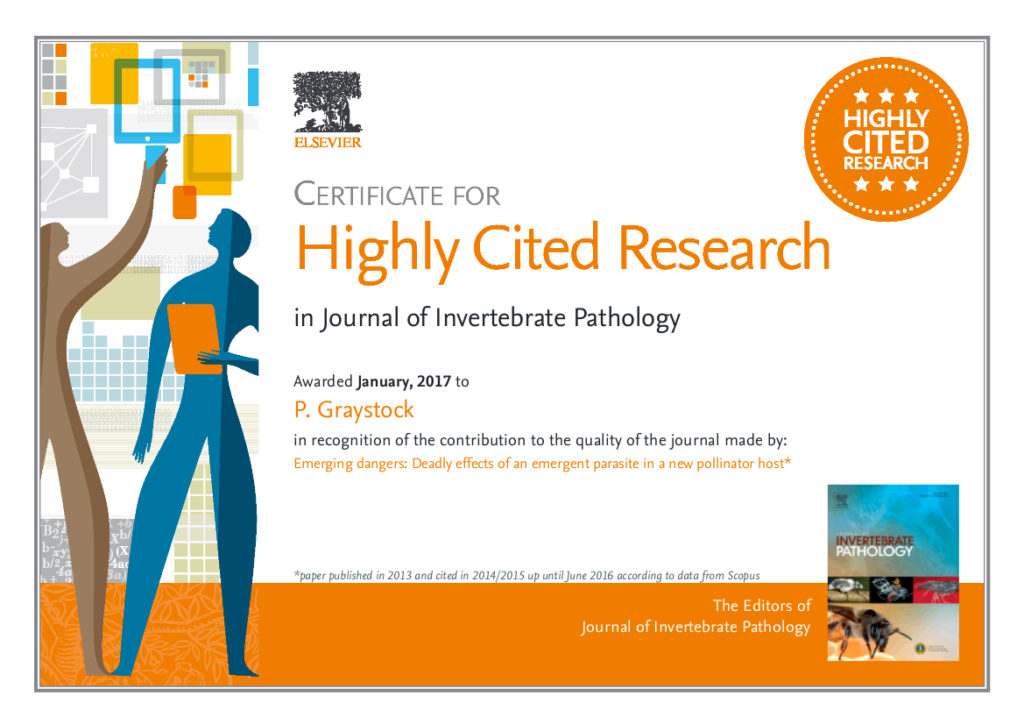 The article was written in collaboration with undergraduate student Kathryn Yates, plus Ben Darvill from the Bumblebee Conservation Trust and my PhD supervisors Dave Goulson and William O.H. Hughes.  It describes how we identified the parasite, Nosema ceranae in wild bumblebees in the UK. We go on to test the effects of this parasite on the common bumblebee Bombus terrestris, and find it to be harmful to the bumblebees survival and an aspect of their physiology known as the Proboscis extension response.

To learn more, the article can be read here

Today has been the final day of the International Congress of Entomology, held in Orlando Florida.

The first thing i must say, is this was a HUUUGE event! Far bigger than any other conference i have attended. There was a total of 6,682 delegates from 102 countries! Spread over a large venue, it really was a race to get to the different talks in time with 10’s of talks taking place at any one time it took most of a morning to plan each day! The topics were diverse across the entire diversity of insects (as you can imagine), and frustratingly, but maybe not surprisingly, many of the bee talks weren’t necessarily near the rooms where the parasite or microbiome talks were being done! That couldn’t stop me from being excited to be there though and see as many talks as i could! I should also mention that i was there, in part, because of the generosity of the ESA who kindly awarded me an Early Career STEP travel award to attend and present my work – THANK YOU ESA!

In the session hosted by Dr. Hollis Woodard, Dr. Quinn McFrederick, and Dr. Theresa L. Pitts-Singer. I presented my work looking for links between the population genetic structuring within a host species (bumblebees) and their gut microbial community structure. Its a rather large dataset and I was only able to present a select few of the findings. Nevertheless, it was well received and i’m excited to get it published soon!  No doubt so is my supervisor on this project, Dr. Seirian Sumner! 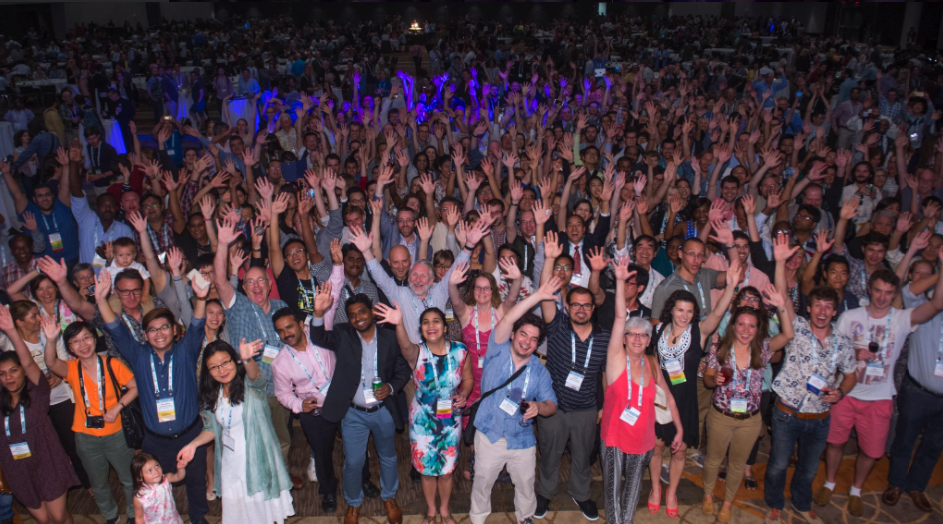 Well, somehow in between all the talks and the running around i was able to meet some great new friends, many of whom i’ve read a lot of their awesome work! Also, i got the chance to catch-up with post-docs and supervisors of christmas past! A postdoc from my time at the University of Leeds, Dr. Adam Smith, is about to publish some bumblebee behaviour work we did together from our time at Leeds, which is fantastic! and Dr. Seirian Sumner will shortly become a reader at UCL!

Overall it was the most exhausting conference i’ve been to but certainly worth it for all the cool new science i got to see in addition to new contacts made and old ones renewed.  And wheres the next one? back in Helsinki! 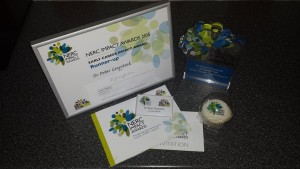 I’ve had a great evening at the NERC awards. Whilst I didn’t win, I came runner-up which means I get funding to continue researching threats commercial bees may pose to wild bees…and I got a cupcake! 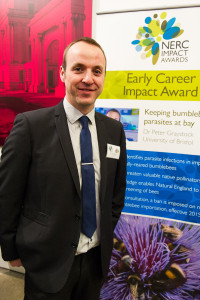 In my category of ‘Early career impact’, Professor Hannah Cloke won for her work developing new techniques and methods to forecast flooding. The award evening, hosted at the Royal Institute of British Architects in London, was a huge networking event with key industrial partners attending and provided a platform to launch the NERC 50th anniversary year, celebrating half a century of ground-breaking science. 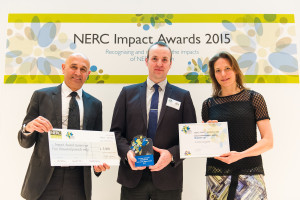 NERC has all the winners and runners up listed on their website: http://www.nerc.ac.uk/latest/events/impact/finalists/ 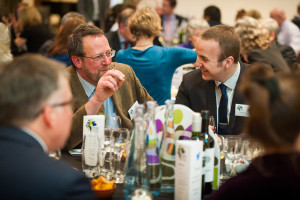 I’m delighted to find out that I have been shortlisted for the NERC Early Career Impact Award!

NERC is the UK’s main agency for funding and managing research, training and knowledge exchange in the environmental sciences. To mark its 50th anniversary, NERC are hosting their inaugural Impact Awards. The awards recognise and reward NERC-funded researchers whose work has had substantial impact on the economy and society.

My shortlisting is as a result of the work i have been carrying out during and since my PhD, investigating the threats to conservation that the importation of commercially reared bumblebees pose to native bumblebees and honey bees.

I now will have an interview in January followed by an award ceremony where the winner and runnerup will be announced. As part of the ceremony a short video of my work will be shown which will be filmed in December (not a great month to show bumblebees!), so that’s all very exciting and ever so slightly nerve wrecking!!

It feels like its been a long time coming! 4 years of ‘messing about with bees’, the compilation of a 7 chapter thesis, handing it in, a VIVA, some minor corrections and handing in the final, final draft (which by then bore the name ‘Final2_edited3_new_currentX’). I today had the formality of the graduation ceremony. It may have been one of the hottest days of the year but nothing was stopping me from donning my massive green gown on top of my suite.

Prize: Today I won the cash prize for ‘Best Poster’ at the 2010 Postgraduate Symposium at the University of Leeds! 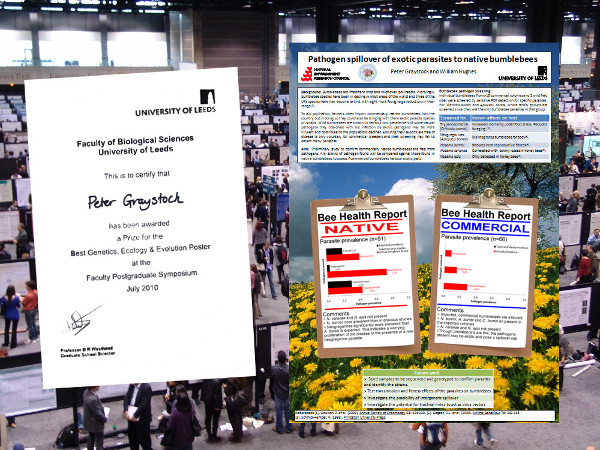 My poster, titled ‘Pathogen spillover of exotic parasites to native bumblebees’ showcased some of the preliminary data collected over the first year of my PhD.

“The poster sessions were an opportunity for students to present their research and addressed different scientific themes including molecular and cellular biology, structural molecular biology, plant sciences, cardiovascular and sports science, genetics, ecology and evolution and integrative membrane biology.”

I’m told its tradition to spend the prize money buying my colleagues drinks… You can’t argue with tradition!